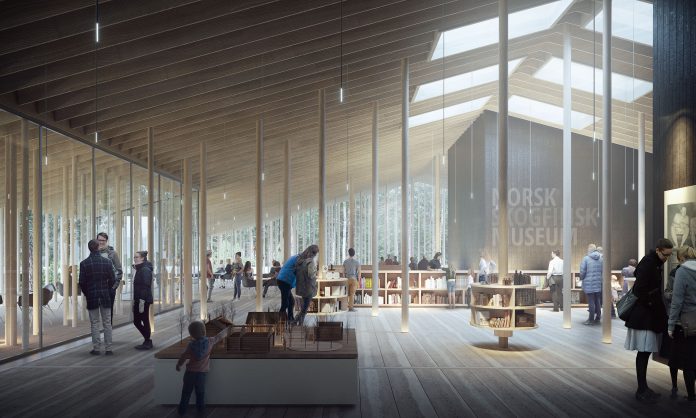 A team of young architects based in Copenhagen has won first prize for a museum competition in Norway. Their proposal for a new Museum of Forest Finn Culture (Finnskogens hus) in Svullrya, Norway was chosen from 203 entries in the fourth largest architectural competition in Norway to date.

‘Finnskogens Hus’ is a museum in the forest, relating to its close context as a transition between inside and outside. The Forest Finns migrated from eastern Finland towards the forested regions in central Sweden and eastern Norway in the late 16th / early 17th century. They practiced so called slash-burn agriculture, which involves sowing grain in the ashes of the burnt forest. In addition to their special slash-burn technique they also brought with them their building tradition with smoke cabins.

Surrounded by a forest of columns the new museum building evokes curiosity and attracts visitors to interact with the building and the surrounding landscape. It creates a new framework where visitors can learn about the rich history of the Forest Finns. The museum is characterized by the large roof and the forest of columns; creating a symbiosis between the nature and the building, between inside and outside.

The playful column facade gives the building a unique expression, especially during the dark hours of the day when the light from the inside trickles through the forest of columns and light up the surrounding landscape. When you approach the building, the entrance will appear as a glade through the forest and lead you into the reception area, café and library.

Light filtered through the ceiling is a reference to the Forest Finns building technique where smoke was ventilated out through a smoke hatch in the ceiling.  Finnskogens Hus is a simple building that in many ways are relating to the Forest Finn Culture with its direct relation to the forest. Wood is present in both structural elements and interior spaces, where for example burnt wood is present to tell a story about the slash-and-burn cultivation in the Forest Finn Culture.

Filip Lipinsky tells Daily Scandinavian that four architects met in Copenhagen and became good friends. Three of them started 2 years ago to do open architectural competitions. “Already in the first competition for a Cultural House in Sweden, we got 2nd prize amongst about 60 entries, which proved we had a strong team,” says Lipinsky.

Thereafter the architects have indeed proved to be a winning team, with prized for a church in Copenhagen and a school building in Sweden. “After this we joked that we now only were missing a first prize,” says Lipinski. And now they’ve succeeded with thee winning prize for the Museum in Norway.

Team member Andrea Baresi moved to Barcelona to start his own visualization studio and joined the museum competition from there.

Copenhagen Architects Won First Prize in International Architectural Competition, written by the Daily Scandinavian team in cooperation with the architects.

Swedish Lillian of the Eighteen Summers