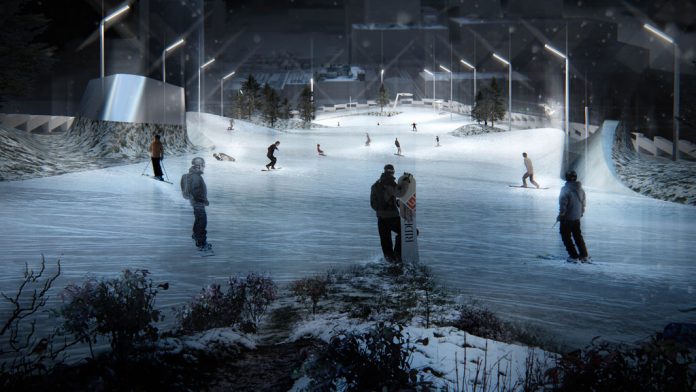 An artificial ski slope and recreational hiking area are set to open in the spring 2019 in Copenhagen, built on top of the new waste management center.

Ski enthusiasts can soon hit the trails on the roof of a waste-treatment plant in Copenhagen. The capital of Denmark is trying to solve the problem of how to cope with a mountain of trash. The city has soon a new attraction, Copenhill (Amager Bakke).

Spectacular and innovative in the true sense of the words, 10 minutes from downtown Copenhagen. Its main facility is a futuristic building with a sloping roof nearly 280 feet high that’s covered in a material called neveplast. It looks just like a ski slope, except it’s colored in vibrant shades of green.

Not only will the new architectural beacon be visible from most of Copenhagen, a giant chimney way up on top will be blowing giant smoke rings. This sounds like something out of a sci-fi fantasy but will be reality as the power plant opened in 2017 under the name ARC (Amager Ressource Center).

The ski slope forms part of the Copenhill mountain activity center, designed by BIG in collaboration with SLA Architects, which covers the power plant in the Danish capital.

“I think everybody is surprised to start with when they look at it and it’s not snow,” said Christian Ingels, the director at Copenhill. “It’s green dry-slope material. After one or two runs, your mind is automatically adjusting so you feel exactly like skiing.”

You can bring your own equipment, or you can rent some from the local shop, Steep and Deep, where the experts will be ready to help you. Just like at more traditional ski sport destinations, you can of course finish your day on the slopes with after-ski at Copenhill’s very own café and after-ski bar.

Although only around half of the slope has been installed so far, the company has carried out several test days before the official opening. “It’s a fantastic experience in the middle of a city to be able to do what you do like the most,” said visiting skier Pelle Hansen. “Instead of having to go six, seven, eight or 10 hours to a ski destination, you can be here in 10 minutes.”

When complete, the 400-metre long slope will run from the top of the 90-metre-high building to its base, with a 180-degree turn halfway down the piste.

If you are not much of a skier, you can also try the hiking trail that goes all the way along Copenhill’s roof. At Copenhill, you will also find the world’s highest climbing wall of 85 meters, where certified climbers can test their skills.

“It’s fantastic that one can ski without snow,” said ski slope visitor Tommy Christensen. “It’s a slightly different experience than to skiing in real snow, but it’s my second run and I’ll try it again. It looks promising.”

Coronavirus: What It Means For Your Visit to Scandinavia Or Elsewhere

Scandinavia Among the Most Cyber-Secure Countries in the World