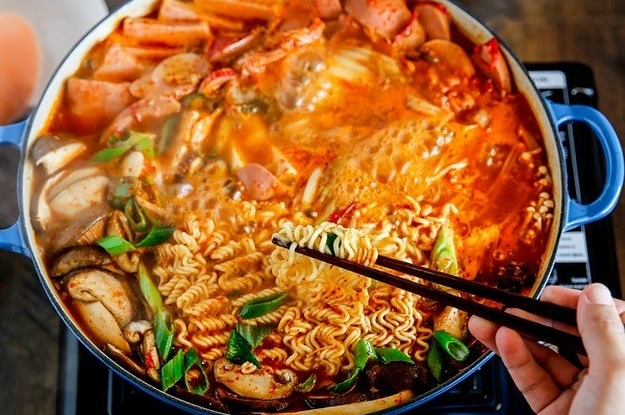 Food in Korea consists of a cascade of gastronomic gimmicks and special traditions.

When drinking from small glasses you must for instance cover the glass by hand. You must never pour wine or water into your own glass yourself.  You must receive everything using both hands if an older person than yourself is serving you, and you NEVER drink alone. Always say cheers.

Drinking and saying cheers in Korea, however, is frequently being done. Korea has actually the world’s  largest alcohol consumption per capita. Therefore, they have invented the concept of anju.

The Korean term anju means in fact ‘eating food and drinking alcohol’. The alcohol may,however, be a glass of soy.

You may never have heard of Soju, but it’s actually the world’s most-selling spirit.

It is a distilled vodka-like Korean alcohol based on rice. Because it’s sweet, round and pure flavor, it’s popular with food. It is available in extremely many versions – pure as well with added flavors – but always bottled in the characteristic green bottles.

Done right, soju must be served in a so-called hurricane, shaken with a special technique, so that a spinning malfunction occurs within the bottle, and according to tradition sends away the evil spirits. Mixed with beer you get a so-called somaek.

If you’re not familiar with the Korean food lingo, you have a lot to learn. But, don’t worry. At Ssam you can learn all about all the unique rules, traditions and food dogmas.

The owners of Vesterbro’s Korean restaurant Ssam, Jeff Larsen and Jeong Hwa want to teach the Western world, and especially Copenhagen, some of the Korean-based eating and drinking traditions, and therefore they have opened Ssam in Colbjørnsensgade just behind the main railway station.

Discover something you did not know about the vast land 8000 km to the east.

Jeff Larsen was adopted from Korea, and is educated engineer in Denmark. He worked for eight years in Korea, where he met his Korean wife and cook, Grace. She was always dreaming about opening her own restaurant, and Ssam has now become a reality.

The restaurant is located in Colbjørnsensgade among strip clubs and hotels on two floors and is completely refurbished by the couple in a modernistic style. The spiral staircase down to the high ceiling basement looks like something Arne Jacobsen could have designed, and there is a corner bar as well as a couple of tables. Upstairs there are more tables, divided into lots of cozy corners, exposed brick and pleasant lighting. In the restrooms there are colorful posters displayng Korean celebrities.

The menu consists of some of the most famous dishes – including bibimbap, kimchi and KFC (no, NOT Kentucky, but Korean Fried Chicken, which is an art in itself).  The waiters are very helpful in explaining about the food, culture and traditions.

All of the team is from Korea, and love to tell you about food and traditions. Jeff speaks Danish, all others English.

Prices are for most dishes are below 100 kr, and there are also vegetarian options if you wish.

Viking Silver On The Menu Once Again, But Sweden – And Scandinavia – Has A Quiet Antique Tradition

The 21 Best Affiliate Marketing Strategies for 2023

The High-Level Routes in Northern Norway

Viking Silver On The Menu Once Again, But Sweden – And...