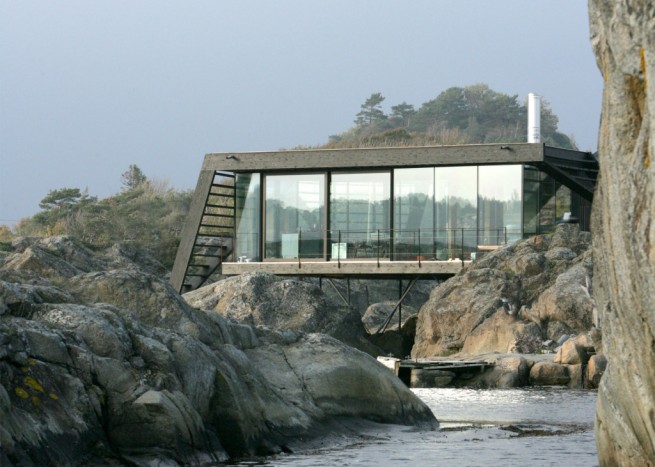 Lund Hagem Architects, based in Oslo, Norway replaced an existing building with two blocks by a decked walkway that widens out to serve as a terrace.

The area located off the coast of Helgeroa village in Southern Norway, consists of several small islands with exposed rock surfaces that are mostly accessible by boat.

The result is a charming holiday home on stilts perched over an uneven rocky site for a family of four; an interior architects, an artist and their two children. The 807 square-foot (75 square meters) Cabin Lille Aroya has become an extension of the majestic landscape.

The cabins location just five meters from the water, offers amazing unobstructed sea views, but also strong winds. The wing containing the bedrooms, has been placed behind the front end of the building, helping to shelter it from offshore wind. It features pine with a natural finish. The interior seems to be finished in light wood and bare concrete. A slatted triangular frame to the front provides both anchorage against the wind and solar shading.

“The new volumes sit naturally with the existing landscape and allow for free circulation and use of surround areas,” said the architects. Cabin Lille Arøya is one of three island cabins recently designed by the architects.

The architects add, “The topography of the site did not naturally lend itself to building and the existing house, which occupied the ridge of the island it stood on – the highest point and the only naturally horizontal surface there. The building seeks to enhance the qualities of the site and make use of areas that originally had no value.”

The wing containing the main living spaces has a small kitchen to the back, a dining area and a living room to the front. Only the master bedroom is directly accessible from the living area; the other three bedrooms and bathroom appear to be completely separate and are accessed by the terrace.

“The materiality of the interior in this case is treated as the exterior, to minimise the threshold between inside and outside, and further enhance the idea of the summer cabin as a place where you live in harmony with the surrounding landscape,” said the architects.

The two parts of the house are fixed in place by thin galvanized steel stilts that help to create a level footing among the craggy boulders.

Photography is by Alexander Westberg and Lund Hagem.

The 14 Islands of the Swedish Capital

How to Pack for a Trip to Norway on a Budget