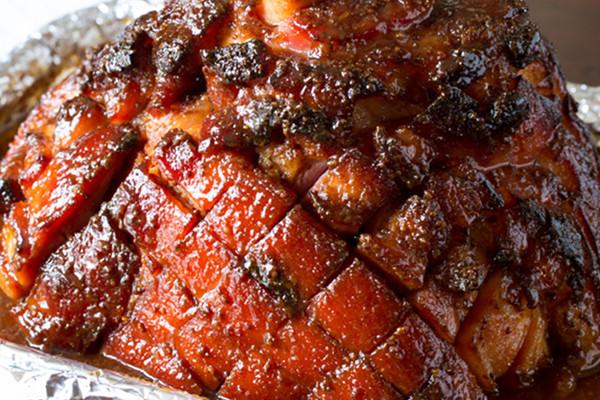 There are several traditional hams in Scandinavia, all salted and smoked, but not dried. It is possible of course to dry ham in the northern climate, as with fish, but for some reason it has just never been done.

Considering the quantity of pigs reared in Scandinavia, the number of gourmet preparations is surprisingly small, and a really good ham is hard to come by. Actually, a lot of salted and dried Italian ham are of Danish origin.

Should you feel the urge to make your own salted and air-dried ham, it’s not difficult, if you live in a a country where winters are cold.

Scandinavian Ham
Smoked salted hams are nearly always boiled or baked. The Swedish juleskinka, served for Christmas Eve, is prepared with a delicious layer of mustard, breadcrumbs and brown sugar. Boiled and sliced ham is a favorite topping for open sandwiches, often topped with Italian salad and cress.

A whole ham is a daunting hunk of meat, but for a great big party it’s easy to prepare and there are no last-minute jobs to attend to, once it’s boiled and baked. You can prepare smaller family-size cuts in the same way.

Cooking ham
It’s far too easy to overcook ham, so the safest way for a 1kg piece is to put it in the fire in a pot with hay and/or herbs on the bottom and then plenty of cold water. Bring to the boil and turn off the heat. Let the ham sleep until the water is cool and it will be perfect.

5 Top Attractions in Copenhagen for Students

Sky-High Fun in the Danish Capital of Children

5 Top Attractions in Copenhagen for Students