Victor Borge was born as Børge Rosenbaum in Copenhagen, Denmark, into a Jewish family. His parents, Bernhard and Frederikke Rosenbaum, were both musicians (his father was a violinist in the Royal Danish Chapel, and his mother played piano), Borge began to lear piano at the age of three, and it was soon apparent that he was a prodigy.

He gave his first piano recital when he was only eight years old, and in 1918 he was awarded a full scholarship to the Royal Danish Academy of Music. 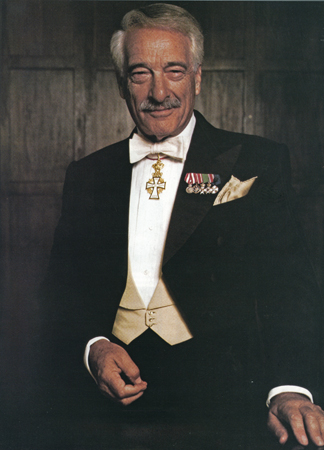 Borge played his first major concert in 1926 at the Danish concert-hall Odd Fellow Palæet . After a few years as a classical concert pianist, he started his now famous stand up comedy act, with a signature blend of piano music and jokes. He married American Elsie Chilton in 1933, the same year he debuted with his revue acts. Borge started touring extensively in Europe, where he began telling anti-Nazi jokes.

When the Nazis overtook Denmark during World War II, Borge was playing a concert in Sweden and managed to escape to Finland. He traveled to America on the USS American Legion, the last passenger ship that made it out of Europe prior to the war, and arrived in America on August 28, 1940. Disguised as a sailor, Borge managed to return to Denmark once during the occupation to visit his dying mother.

Even though Borge didn’t speak a word of English upon arrival, he quickly managed to adapt his jokes to the American audience. He took the name of Victor Borge, and, in 1941, he started his American career at Bing Crosby’s Kraft Music Hall.

Borge won the title “Best New Radio Performer” in 1942. Soon after the award, he was offered film roles with stars such as Frank Sinatra.

Borge appeared on Toast of the Town hosted by Ed Sullivan several times during 1948, and became a naturalized citizen of the United States the same year. He started the Comedy in Music show at John Golden Theatre in New York City on October 2, 1953. Comedy in Music became the longest running one-man show with 849 performances when it closed on January 21, 1956 – which placed it in the Guinness Book of World Records.

After divorcing his wife Elsie, he married Sarabel Sanna Scraper in 1953. Continuing his success with several tours and shows, Borge played with some of the world’s most renowned orchestras such as the New York Philharmonic and London Philharmonic. He was invited back to his native country to conduct the Danish Royal Symphony Orchestra at the Royal Danish Theatre in Copenhagen, Denmark in 1992.

Borge appeared often on televison. He guest starred many times on Sesame Street and was the star guest on the fourth season of The Muppet Show.

Borge helped start several trust funds, including the Thanks to Scandinavia Fund, which was started in dedication to those who helped the Jews escape the German persecution during the war. Borge received Kennedy Center Honors in 1999.

Aside from his musical work, Borge wrote two books, My Favorite Intermissions and My Favorite Comedies in Music (along with Robert Sherman), and the autobiography Smilet er den korteste afstand with Niels-Jørgen Kaiser. Victor Borge continued to tour until his last days, performing up to 60 times per year when he was 90 years old.

Borge died in Greenwich, Connecticut, after more than 75 years of entertaining.

Victor Borge Hall, located in Scandinavia House in New York City, was named in Borge’s honor in 2000, as was Victor Borges Plads (“Victor Borge Square”) in Copenhagen in 2002.

He fathered five children who, on occasion, would perform alongside of him: Sanna, Victor Jr., and Frederikke with Sarabel; and Ronald and Janet with Elsie.

The Best Spots and Hidden Gems in Copenhagen

Why do People Want to Live in Scandinavia?

How is Scandinavia Solving the Economic Corona-Crises?

The Best Spots and Hidden Gems in Copenhagen