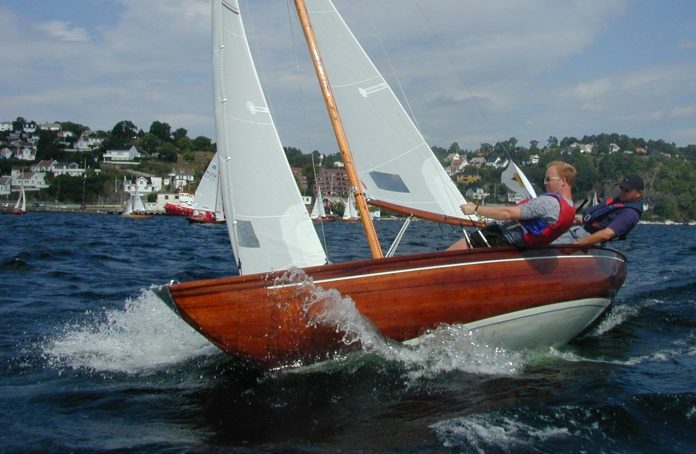 The Norwegian sailboat BB1 is 20 feet long made of mahogany. The very first boat was launched on 1 January 1956 and was produced in series until 1968. It was built in excess of 1300 of the little Norwegian sailboat BB1s and today there are about 350 left in Norway. The rest were exported to USA, Canada, Asia, Africa and most countries in Europe.

Borge Bringsværd from Arendal had the idea for the boat and built it at his yard outside Drøbak. He collaborated with jeweler Knut Larsen on the construction.

Børge Bringsværd
Børge Bringsværd built rowboats, kayaks, motorboats and sailboats. He also built a boat for the famous Norwegian painter Edvard Munch. The first BB1 he built alone. The logo BB11 was embroiderd on the sail.  BB is Børge’s initials and 11 denotes the eleven square meters sail. The price was about $ 550 and the serial production could begin.

You may also like: Beaches and Picturesque Seaside Towns in Southern Norway

BB1 has been floating for more than 60 years. It has survived rough sea and stiff gale, rot and rain and even plastic boats. In 2006 it was named the all-time Norwegian sailboat by the magazine Seilmagasinet.

The Little Norwegian Sailboat
The BB1s are good sailers, stable and handle wind well. BB1 is a nice looking small classic looking a little like Sunbeams or Brown Boats in England. BB1 was used as sail-trainer at Haakonsvern – the Naval academy. The long keel and high freeboard make it directionally stable and seaworthy.

The last produced BB1 was launched in 1968. You can see the sailboat’s data here.