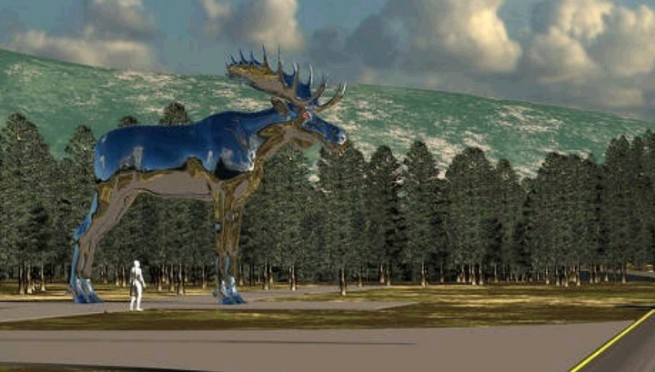 Halfway between the capital of Norway, Oslo and Trondheim, on route E3, you can now see a 10 meter tall Elk statue, 30 centimeter higher than its Canadian counterpart, Mac the Moose. 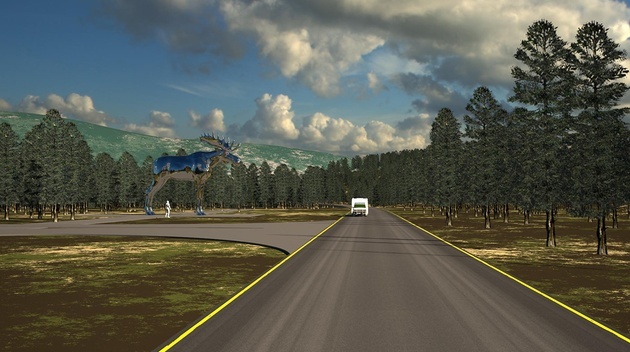 The giant elk, created by Norwegian artist Linda Bakke, welcomes visitors traveling northwards from Oslo. Storelgen (The Big Elk) was created in conjunction with the Norwegian Public Roads Administration (NPRA) in an attempt to reduce traffic accidents. The beast will mark the halfway point on the road between the two cities, at Bjøråa resting stop,  and drivers are encouraged to break the monotony of their driving and get out of their cars to have a look.

Artist Linda Bakke says she also hope that motorists are reminded to be aware of the very real possibility of wildlife on the roads.

The elk is a lifelike depiction and is made of shining polished steel that will reflect the natural scenery around.

Bakke adds that it was important that the elk was made higher than Mac the Moose, a fiberglass moose, built in 1984 in the Saskatchewan city of Moose Jaw, Canada, constructed by the artist Don Fould. He used a steel frame, covered with metal mesh and completed with four coats of cement.

The sculpture was erected in China, largely for cost reasons, but Bakke says that the Chinese were also the best in terms of craftsmanship, so it made perfect sense to do it there.

One of Norway’s Most Interesting Acts of Electronic Music

An Empathetic Album from Norwegian Singer/Songwriter