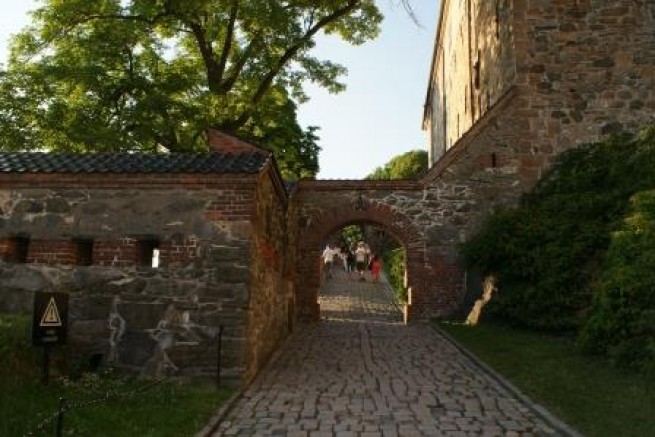 Oslo has many popular attractions, including the Viking Ship Museum and the Vigeland Park, but there’s another side of Norway’s capital that few people see. Take a tour or visit Oslo’s top must-see spooky spots, and plan your next ghost adventure.

Christiania Square – A historic district
Christiania torv is a square in Rådhusgata in Oslo’s old city centre, an area known as Kvadraturen.

Some of Oslo’s oldest buildings are found around this square, and one block down you will find Christiania’s first town hall from 1641, today Gamle Raadhus Restaurant, one of the spooky places in Oslo. The building was raised in 1641 and there has been a restaurant since 1856. The rustic wine cellar and the men’s room downstairs are the haunted places. Once there were also prison cells there with chains connected to the walls. The prisoners were waiting to be beheaded. It’s probably some prisoners that remain to this day. Many are reluctant to go down in the basement.  At the Theatre Museum (in the same building) an older man again appears as a ghost, surrounded by strong cigar smell. People hear steps and some heavily breathing. 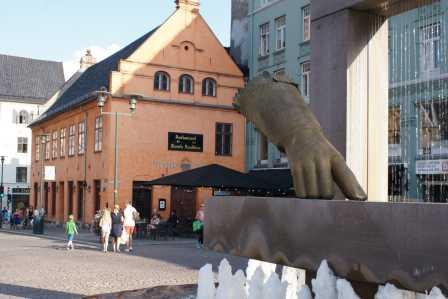 Those who work there say they often hear the sound of shuffling steps and links that scrapes across the floors and also guests report that they have heard noises in the men’s room. A Swedish summer waitress claims she saw a white person in the wine cellar. It might have been a former chef, having worked in the establishment for more than 30 years.

Gamle Raadhus was the first Masonic Lodge in Oslo.

Christiania square is known for its fountain, with a sculpture of a hand pointing to the ground. After the big town fire in 1624, the Danish-Norwegian king Christian IV decided to rebuild the town in this area and name it after himself.  The sculpture is a symbol of King Christan IV pointing to this spot, saying, “The new town will lie here!” The fountain symbolizes that this was the only place with clean water.

Four women were found guilty in having put the town on fire in 1686, and were punished by decapitation on the square. Beheading was a popular amusement at that time.

At least 14 generations have lived in the district before, and many of them have apparently not abandoned us. It is no coincidence that the ghosts go again right here. In the old days people went to Christiania Torv to chat and shop, but the cobbled square was also a place for executions. At that time people could risk being put in the pillory for speaking ill of the king, and could be beheaded with either sword or ax. 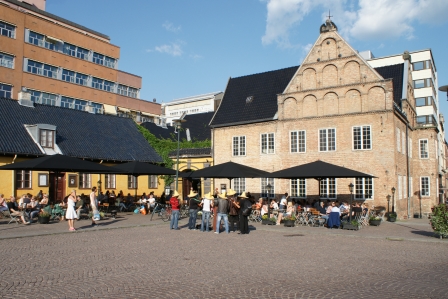 On the other side of the square you will find a yellow building, Celsius Restaurant, the other spooky place in this area. That’s where the executioner is said to have lived once.

A lot of people claim to have seen the executioner wearing black gown in front of the fireplace in the restaurant. The waiters at Café Celsius were even once resistant to go their nightshift there.    One of the girls saw a monk-like figure pass through what today is the coarse kitchen. In the café waiters have noticed a cold draft, that things move, and glass firmly and steadily falling from shelves inexplicably. It is always the innermost glasses that fall down.

Once, a cash register was ripped away under the fingers of one waiter as he was registering a receipt. A man dressed in black has also been seen in the restaurant after closing, and people claim to have heard whispers or suddenly been pushed.

Café Celsius to the left in image above) is the oldest half-timbered house in Oslo. Next door is a brick building from 1628, which is the oldest common house in town. Marthe has been down in the basement of the brick building and felt that it is terrible energies here, but she has not brought ghost hunters there. 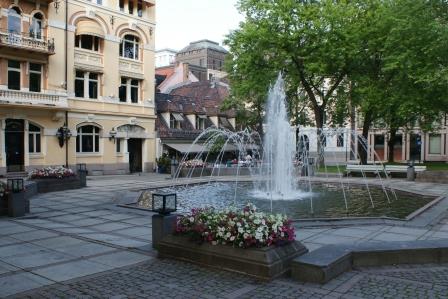 At the Bank Square, a few minutes walk from the Christiania Torv, we find the Waisen house in Kongensgt. 1. It was built 1638, rebuilt and enlarged 1640. Rebuilt 1871 by Jacob Nordan and 1920 by Arnstein Arneberg. Called Christiania Opfostringshus. Underneath there are escape tunnels from the Akershus Fort. It was the fines house in the 1600s. It was damaged by cannon balls during the Seven Years’ War. It was the first kindergarten in Oslo. 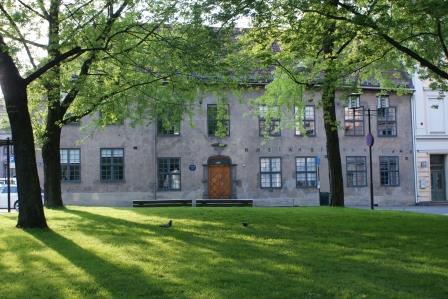 The Waisen House has been described in the Norwegian folk tale collected by Asbjørnsen and Moe, An Old Fashioned Christmas Eve.

The Bank Square (Bankplassen) was surrounded by three banks, hence the name. Today only Norges Bank (Bank of Norway) has it’s headquarter there.

Oslo Ghost Trek
It’s Wednesday 7 pm and we meet our guide Marthe Andersen at Christiania Square. The group of about 15 people is tense and expectant, to take part in this ghost trek, organized by the Oslo City and Nature Walks. 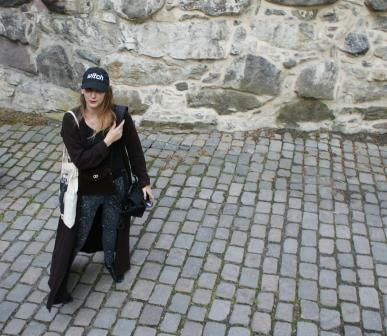 Marthe tells about ghosts who walk aimlessly around in the streets of Kvadraturen, and in the houses from 1600 – and 1700. The darkness and silence descends on the Akershus Fortress. We shudder a bit when Marthe says that the fortress is the place in Norway that has the most ghosts. She provides historical facts, including the founding of the fortress, its function through the years, and several tragic destinies. The castle was for many years besieged by enemies. Many lost their lives here, people have died of plague and famine or tortured to death.

“No wonder there is a lot of energy here, and that people have heard screams or seen ghosts,” says Marthe and tells about the burning women, “Nightpyres”, who were visible before any fire on the fort. Nightpyres are baby sized females, who is said that to have ugly grin and a ghastly laughter. 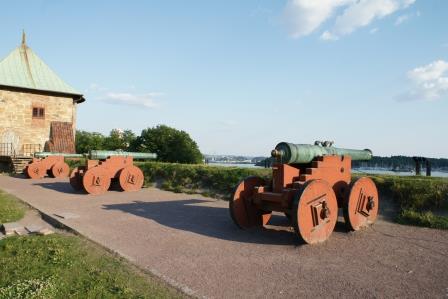 Many have felt someone breathing behind them when they walk across the drawbridge leading into the fortress. It might be the old gatekeeper. 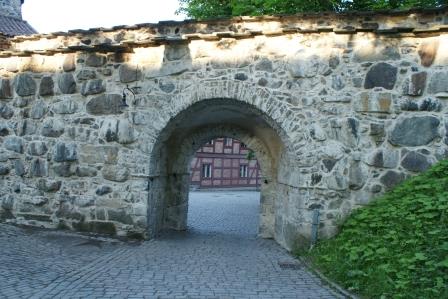 Marthe tells us the story of a Swedish drunken soldier riding alone against the fortress walls, cursing and screaming that he was going to conquer Norway. The Norwegian soldiers shot both him and his horse, and the horse’s ghost has scared many since that time. It is said the Akershus Fort is the strongest fort in Northern Europe. 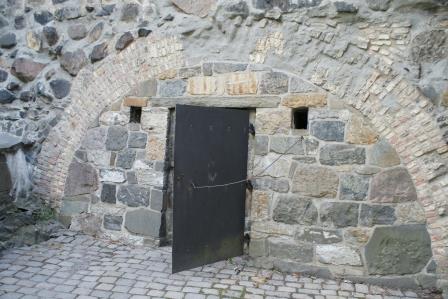 The Virgin Tower and the Suicide Wall are also haunted places in Akershus Fort. 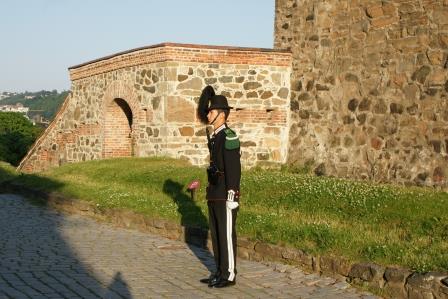 Leaving the fort we pass some white buildings raised in the 1800s. This was the old prison where the Norwegian Robin Hood and escape king, Ole Hoyland, was prisoned. 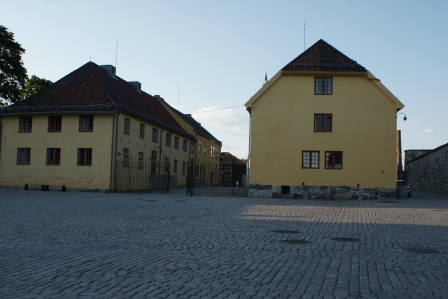 Despite strict security measures he managed for four years and long planning to escape from Akershus. After three years of freedom he was reported and arrested, and this time he could not get free. He sought a pardon both in 1846 and in 1847, and shortly after the last rejection he committed suicide in the cell.

Haunted Hotel
Last stop on the Ghost Trail is Kongensgate, and Marthe says there was once found a mass grave from 1700s, probably a war grave of Karl 12’s campaign in 1716. Today Hotel Grims Grenka has been raised on the site, and it is still a haunted place. 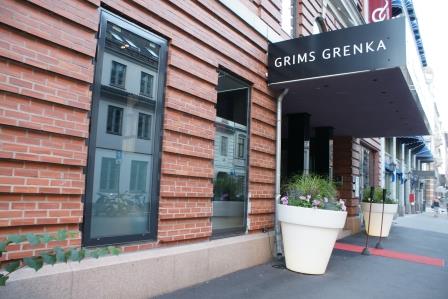 “Many employees quit after experiencing ghosts, for example, a night watchman alarmed when a white-haired, bearded man with black clothes appeared in the empty air. Others have found that it suddenly smelled cigar or wet wool.”

Marthe was even frightened when she saw an iron door go up by itself, and also found that a heavy chandelier in the lobby began to spin around its own axis.

One year a lot of young children, participating in Norway Cup, one of the world’s largest soccer championships for young people, stayed at the hotel. One night the alarm and electrical appliances were turned on and off, without anyone having been near them, and since then no participant from the cup has stayed there.

Haunted Eve
Sure enough, none of us got close encounters with ghosts in Oslo this evening, but Marthe confirms that she occasionally gets feedback from people who have seen and experienced things. Spooky occurrences including footsteps heard in empty rooms, unseen hands rattling, moving chairs and cold spots have all been reported by guests, patrons and staff. 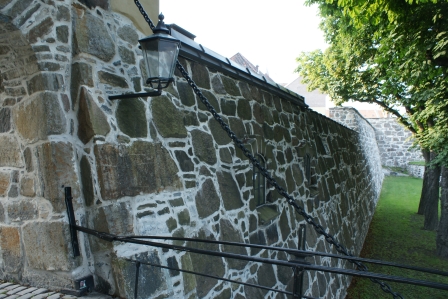 There is a book on “The Ghost Walk in Oslo” written by Kristin Amundsen and Ross Kolby. Kirstin Amundsen is an Oslo authorized guide, who organizes Oslo City and Nature Walks.

The season starts in April/May and lasts until mid-September.  Reserved guiding is available at other times.

For further information on time and place, can be found at Oslo Walks.
Text and photos: Tor Kjolberg