Known as the largest public Evangelical Lutheran church in Scandinavia, Grundtvig’s Church (Grundtvigskirken in Danish) was built as a national monument for N.F.S. Grundtvig (1783-1872), a Danish philosopher and social reformer.  The Church is located in the Bispebjerg district of Copenhagen. Building commenced in 1921, but main architect Peder Vilhelm Jensen-Klint died in 1930. He was succeeded by his son Kaare Klint and later his grandson Esben Klint, who completed the church in 1940. 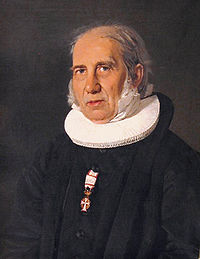 Its design is a combination between a cathedral and the style of old Danish country houses. The yellow brickwork church stands 50 meters high, which makes it a landmark that can be seen from afar.

Nikolai Frederik Severin Grundtvig, 1783-1872, was a Danish author for almost 75 years. Most of his many works have not been read by great numbers either in his own day or subsequently. His ideas and attitudes are more important than the individual titles.
In his many original and translated hymns, which were mainly published in his Sang-Værk, 1-5 (1837-81), he brought renewal to the National Church of Denmark by imparting a living, homely character to the great Christian festivals.

Even today, his hymns dominate the authorised hymn book, so much so that even non-churchgoing Danes can scarcely imagine Christmas, Easter and Whitsuntide, weddings or funerals without the inclusion of some verses by Grundtvig.

Grundtvig’s work as a theologian, scholar, poet and popular educator was epoch-making. In Nordens Mytologi (1808, The Mythology of the North), he was the first to see an inner cohesion in the pagan myths, and in a greatly expanded, revised edition in 1832 he was able to turn them into the paradigm of a modern Nordic view of life. In practice, his theology concentrated on the experience of baptism and holy communion, both proclaimed by words from the lips of Christ.

From the 1830s, on the background of a Christian faith brought to life in this way, he placed increasing emphasis on conditions of life on earth, keeping a suitable pace with the slow political developments in Denmark towards democracy.

He saw every form of compulsion in intellectual and spiritual life as being perverse. His great argument was for choice cutting through congealed institutions and lifeless writing. He advocated oral formulation, whether spoken or sung, and he made conversation with a lively exchange of views between the parties into his main educational tool.

He stressed the significance of a native language that had been handed down in its purest form by women and unlearned peasants.

As a poet he often combined content and form in potent images, the intent and meaning of which were prophetically obscure, and at other times he was able as no one else in his day to speak simply and comprehensibly on the most elevated subjects.

As a politician he could be extremely realistic, always giving voice to an anti-authoritarian attitude; he supported peaceful change rather than revolution. With Grundtvig, compromise became a way of life in Danish politics and society. He left behind him religious and popular movements which in the folk high schools, the church, the parliament and in the public at large are still influential in Danish society.

Grundtvig must have taken to heart the exhortation in Psalms to “make a joyful noise unto the Lord”; he wrote 1,500 hymns, many of which are sung to this day. With Grundtvig’s musical gifts in mind, the church was designed to resemble a pipe organ.

Could you answer the question where is this? before reading?

The Danish Architect Who Designed the Sydney Opera House

Japan Seen Through a Danish Filter